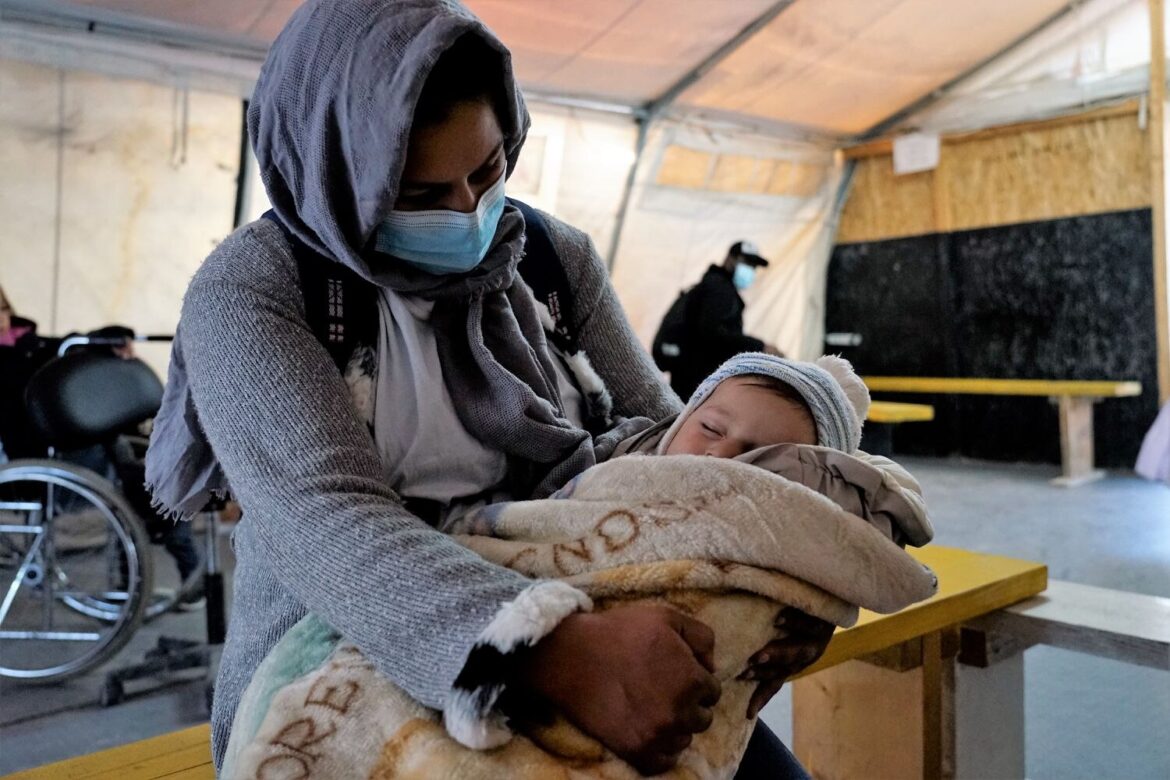 Forecasts that predicted icy temperatures, sometimes below zero degrees, have been met and Kara Tepe, the internment camp on the Greek island of Lesbos to which more than 7,000 people were transferred after the Moria fire , shivering from the cold.

It is the last and most urgent problem in a long list that began to be written in the old enclosure. The situation, say refugees and organizations, is borderline and its consequences on the mental health of those who live there are worrying.

Ali Mustafa, a 20-year-old Afghan boy, says on the other end of the phone that in recent days people hardly ever left the shops because it was cold. The field, located by the sea, is very exposed and the only thing that separates them from the outside is a plastic tent.

All they have to protect themselves from the cold are layers of clothing and blankets. “We don’t have heaters. We don’t even have electricity in our store. We have a generator that starts from seven to ten in the morning, ”he says.

“The temperatures in Lesbos have dropped a lot and it is very cold in the camp. The water is cold, the inside of the tents is wet. Everything is damp, even the blankets and warm clothes, “said Katrin Glatz-Burbakk, from the team of child psychologists at Doctors Without Borders (MSF) in Lesbos, in a statement published on Thursday.

At first, many of the stores lacked the facilities to use these energy sources, according to Shirin Tinnesand of the NGO Stand By Me Lesvos . Some asylum seekers who worked as electricians in their home countries, under the supervision of the field leadership, formed a team and went to work to adapt them.

However, adds Tinnesand, the capacity of the available generators is insufficient and more powerful devices would be needed to be able to use heaters.

In Samos, some 3,500 people are crammed into a center designed for 648 in absolutely miserable conditions. Most of them live in makeshift tents in the forest next to the official facility, without access to sufficient showers and toilet facilities, as well as adequate shelters to keep warm.

Women, men and children have no choice but to live in the dirt and garbage among rats and scorpions. There are hundreds of people who are vulnerable due to serious medical or mental health problems, yet they remain trapped in horrible conditions for months.

In Samos, some 3,500 people are crammed into a center designed for 648 in absolutely miserable conditions. Most of them live in makeshift tents in the forest next to the official facility, without access to sufficient showers and sanitary facilities, as well as adequate shelters to keep warm.

To the cold we must add the wind and the rain. When the sky discharges water, due to the lack of an adequate drainage system, the field becomes a quagmire and the humidity penetrates the tents and the bodies of the refugees.

An EU working group, however, has offered a different view. In a report, to which the German newspaper Die Welt had access in January, they say that the conditions of Kara Tepe are better than those of Moria .

They argue that the tents are prepared for the cold and rain, that there is a water management system to move it away from the tents and that there are heaters available. They also recall the provisional nature of this settlement.

A few weeks ago, different organizations such as Stand By Me Lesvos and The Hope Project collected warm clothes and blankets. Groups like the MCAT, the coronavirus awareness team to which the young Afghan belongs, or Moria White Helmets handled the packaging and delivery. Mustafa says that they need many things because the field is new and they have practically nothing, but that the most urgent thing is to have heat sources.

In that practically nothing that he talks about, practically everything considered essential fits: there is no running water available 24 hours a day, the bathrooms are few, poor and cleaned only once a day, there are not enough showers and, until recently, not even they had hot water.

“They have been bathing in cold water. There are some showers for women, which filled a 20-liter bucket, they went inside and had to pour that water over them, ”says Tina Dahl, head of nursing at the Doctors Without Borders (MSF) clinic in Moria.

All the shortcomings also translate into long waiting lines. Waiting, in its two most common meanings, is what best sums up life, understood only as the fact of being alive, between the fences and wires that delimit the field.

The uncertainty and conditions in which they find themselves have long taken a toll on the mental health of people trapped on the islands. Mustafa arrived alone in Greece in December 2019 and, after having done the interview last November, he is waiting to be informed if he is a beneficiary of international protection.

“I have a friend who lives with me and he hasn’t received an answer yet either. He is worried and thinking all the time, thinking what will happen if they reject him, what he will have to do… It is a very stressful process, ”he asserts.

The uncertainty and conditions they find themselves in have long taken a toll on the mental health of asylum seekers trapped on the islands. In late December, the NGO International Rescue Committee (IRC) released a report stating that one in three people they attended had suicidal thoughts. One in five said they tried to kill themselves.

“That is the result of waiting so long in the refugee camp on this island,” says Omid Mohammad, also an Afghan and a member of the MCAT. He no longer resides in the settlement, but continues to support those still there.

“ When people come from their countries, they don’t know anything about the conditions they are going to face. The asylum process is really slow and they are forced to stay in this place with hundreds of miseries ”, he assures.

IRC has been developing a mental health program on the islands for two and a half years in which, according to Dimitra Kalogeropoulou, director of the organization in Greece, they have seen problems sleeping, depression, anxiety and suicidal thoughts. The arrival of COVID-19 and the confinement worsened the situation and found an increase in, for example, psychotic symptoms and self-injurious behaviors.

Mustafa has seen it with his own eyes. He himself does not feel well most of the time. Apathy, frustration, isolation and discouragement spread in the field as the virus did outside of it.

“I even tried to hang myself, but my son saw me and called my husband. Here I think a lot about death, that it would be good for my whole family, that if I could put a medicine in our food and we all died it would be liberation.

But then I look at my daughter and I think that it is not her time yet ”, reads the testimony of a 32-year-old woman collected by IRC. The little ones are no strangers to the suffering of adults. “Parents, families and caregivers are not well and this obviously deteriorates the mental health of children. It’s kind of a vicious cycle, ”says Kalogeropoulou.

MSF’s specialist children’s mental health team in Moria has treated children with anxiety problems, panic attacks, bedwetting or suicidal thoughts. “Now, at the beginning of the year, we have already seen three more children who have tried to commit suicide,” says Glatz-Burbakk. “It is not a place for children with serious trauma. They have to be evacuated. And it has to happen right now ”.

Educational deficiencies are added to the deficiencies that all suffer. Kara Tepe’s little ones don’t go to school. Asylum seekers themselves, with initiatives like Moria Acadamia, have set up informal schools within their own shops or outdoors, when time permits.

They do not have adequate spaces or the necessary resources, they do not reach all children, but they know that it is that or nothing. And nothing is not an option.

The only aspect in which this venue seems to have improved compared to the previous one is security. There is a better division of space and more police control. According to Dahl, who refers to recent interviews with single women and men who came from Moria, they feel safer in the new location, while men generally perceive the opposite. This is not the case with Mustafa, who claims to feel more secure.

When the flames consumed Moria, some hoped to finally be relocated to other countries, to be transferred to the mainland, or to have at least a roof in good condition under which to continue waiting. However, after spending days in hard shoulders and parking lots and seeing how the new field was being built in a hurry, the illusion gave way to resignation in the face of a new mandatory internment .

For Imogen Sudbery, director of policy and advocacy for Europe at IRC, the situation in the Greek islands is a consequence of the shortcomings of the European asylum and migration system. “It is a crisis made by man, so to speak,” he recounted by telephone, alluding to the inability of member states to agree on the necessary reforms that would lead to a more humane and sustainable scheme.

“One of the main cracks in EU policy, in addition to the Dublin Convention, which prevents a fair sharing of responsibility in Europe, is the lack of safe and legal channels to request protection,” he says.

Regarding the situation of those already on the islands, Sudbery speaks, among other measures, of solving the deficiencies in the settlements and speeding up the asylum processes while maintaining all the guarantees.

Also that more countries join the relocation programs and that these commitments are met. “In the long term we need a system that ensures that the people who arrive are quickly relocated,” he says, “but in the meantime, we have a population of around 15,000 people who have been in the camps for months and years and who need to be moved immediately.”

While they wait for this transfer and the answers to their asylum applications arrive, they hope that no one else has to spend another winter in these conditions and they continue to face, with few resources and much will, the problems and indifference.