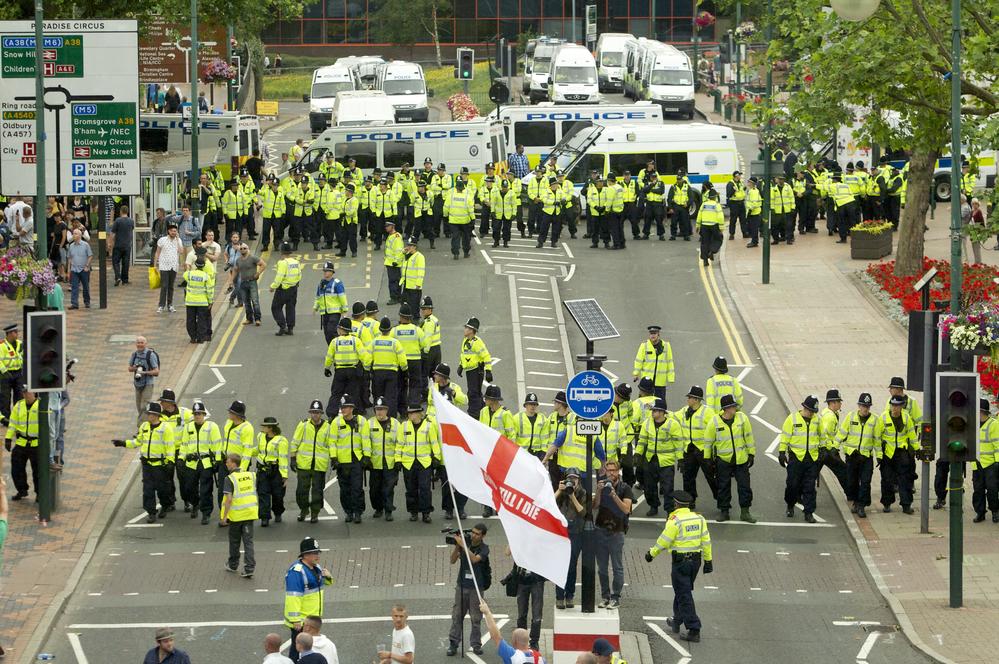 In Bristol, we’ve been having a debate about statues. In our city centre, there’s a statue of Edward Colston. According to the plaque beneath his thoughtful pose, he was a businessman and a benefactor of the city. What the plaque doesn’t explain is that his wealth was won from a system of cruelty, slavery and murder.

Across the Atlantic, the debate about removing statues of racist, violent defenders of slavery has become a convenient excuse for neo-Nazis, Klansmen and the so-called ‘alt-right’ to take to the streets with burning torches, vile chants, and violent acts.

The march last Saturday ended with a woman’s murder. Walking past Colston, his bronze hand resting under his bronze chin, I have to ask myself: could the horror of Charlottesville happen here?

“If you’re a Halal chicken shop,” a friend said to me, when I mooted the subject of this article with him, “then it already has.”

He’s right. Two years ago, I would have said that Charlottesville could never happen here. But that was before a right-wing terrorist murdered Jo Cox, a Labour MP known for her support of refugee rights. That was before a friend was told to ‘go back home’ while walking through central London.

That was before reports of racist and anti-Semitic hate crimes rocketed post the Brexit referendum. That was before, in Bristol again, a man was imprisoned for throwing bacon at our local mosque.

In the past year, we’ve seen a swing to the right in England and an emboldening of right-wing rhetoric and violence. And that swing is happening on the streets, on the internet, and in the House of Commons.

Take Gina Miller. The activist who questioned the legitimacy of the Conservative Party’s decision not to allow a vote on triggering Article 50 has received multiple death threats from right-wing activists who have taken ire at her use of the legal process.

When she disclosed how threats of acid attacks made her consider leaving the UK, one official Brexit organisation, leave.EU, sent a tweet showing her the door. How have we come to the point where a woman talking about threats of extreme male violence is met with mockery by a supposedly mainstream political pressure group?

Online hate directed at women political figures has been on the rise for a long time. Women like me have become horribly used to the insults, threats and general bullying that accompanies our articles or public statements. It’s true, too, that we have become accustomed to the threats and insults thrown at women MPs.

In the past few years, online male violence has become increasingly normalised. The idea that women in the public eye simply have to put up with threats has become accepted, as a quick glance at Twitter replies to women raising this subject proves.

It’s not just online. As mentioned above, we’ve seen a rise of physical and verbal hate crime on our streets. The English Defence League’s marches regularly take place in cities from Bristol to Birmingham to Newcastle.

And in the House of Commons, the Conservative Party has moved further to the right through its partnership with the anti-choice, anti-gay rights DUP. Meanwhile, the increased popularity of hard-right ideologues such as Jacob Rees-Mogg—a man who voted against equal marriage, who dismisses climate change and wants to abolish the Human Rights Act—again normalises reactionary politics that entrenches inequality.

So a shift to the right accompanied by a rise in racist, misogynistic rhetoric and hate crime is undoubtedly happening. But does that mean what happened in Charlottesville can happen here?

Throughout the 20th century, Britain had a proud tradition of anti-fascism. When Oswald Moseley took his Blackshirts to East London, he was met with protests against the racism and anti-Semitism on Cable Street.

Forty years later, similar protests met the National Front in Lewisham. From the International Brigades to the formation of Hope not Hate and Rock Against Racism, Britain has repeatedly stood strong against fascism. Culturally, we’ve never been afraid to mock, satirise, and kick back against those spouting hate.

This, of course, is not to deny that Britain has a history of racism, or to pretend there was ever a time when it did not exist in our society. But, unlike in the US, racist groups in the UK have never gained political traction.

The Blackshirts, National Front, the BNP and the EDL all failed to get legitimacy. Although the BNP enjoyed a momentary rise in popularity, the vast majority of the public held them in contempt for their crude racism.

But there is one political group whose anti-immigrant, far-right rhetoric has taken hold, pushing the Tory party further to the right and shifting the Overton window: UKIP. The party has been instrumental in making anti-immigrant, anti-refugee and specifically anti-Muslim sentiments mainstream.

And it has been supported in this by tabloid headlines that have consistently demonised immigrants and blamed them for every societal ill.

Day after day, we see tabloid headlines refer to immigrants and refugees as ‘swarms’ and ‘cockroaches’. The more we’ve become accustomed to this, the more we’ve seen mainstream politicians pander to far-right rhetoric on immigration. While the EDL remains on the outskirts of political life, the language they use is increasingly echoed in our most widely-read newspapers.

It’s this drip, drip effect of legitimising hateful views that helped Donald Trump’s rise in the US. Opinions once confined to the dark corners of Reddit forums started to be voiced on Fox News. Breitbart went from being a fringe far-right website to being in the heart of the White House. We need to remember that Charlottesville happened only eight months into Trump’s Presidency.

I don’t think we’ll see the far-right march with Nazi flags through central Bristol if Colston’s statue comes down this year. But if we continue down this road where hate speech—both online and off—becomes normalised, where extreme right views are justified as ‘simply another opinion’, and where we drift further away from our cultural pride in anti-fascism, then who knows what could happen. In his 1935 novel, Sinclair Lewis issued a stark warning against the blind belief that “it can’t happen here”. It might be time for Britain to take the warning signs seriously.