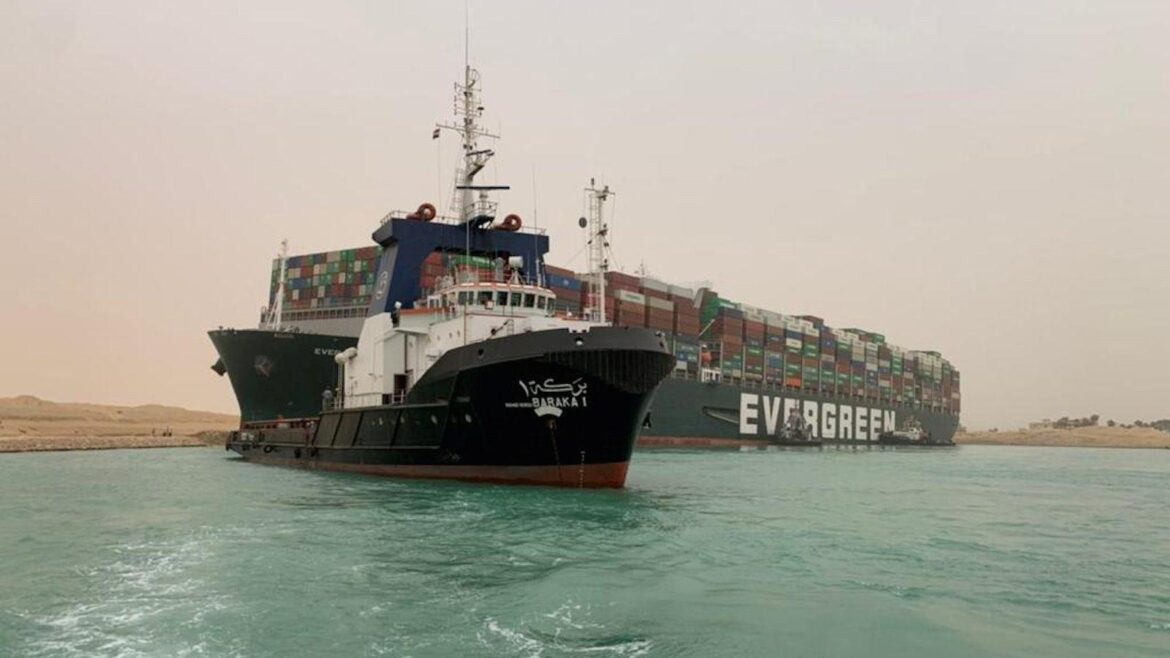 The current crisis unleashed in the Suez Canal by the stranding of the ship Ever Given , which has paralyzed the intense maritime traffic in the area and threatens to hit world trade, is not a new situation.

Due to the location of the pass in one of the ‘hottest’ areas of the world from a geopolitical point of view, the Suez Canal has been the protagonist of some passages in history, such as the Six Day War , which caused the step was closed eight years.

As the BBC reports in a report, in June 1967 15 ships were blocked in the Canal by the crossfire between Israel and its enemies: Syria, Egypt and Jordan.

The war, as its name suggests, lasted less than a week with an overwhelming Israeli victory, but of those 15 ships , one was sunk and the other 14 were blocked for eight long years in an area of ​​the canal called Great Bitter Lake.

“They did not want to be identified as targets so they stayed there,” Sal Mercogliano, an expert in maritime history at the University of Campbell, told the BBC. Egypt blocked the Canal so that Israel would not use it, and at the end of the war maintained closure.

Some sailors from the 14 ships were able to leave within two weeks, but most stayed on the ships for three months. “The countries to which the ships belonged could not reach any agreement with Egypt or Israel to allow them to sail, ” explains Mercogliano. “It was believed that at some point the blockade would end, but it did not end,” he adds.

The shipping companies began to rotate the crews so that the ships and their cargo would not be abandoned. The boredom was such that the sailors on the 14 ships, from Bulgaria, Czechoslovakia, France, Poland, Sweden, West Germany, the United Kingdom and the United States , created the Great Bitter Lake Association and organized sanity activities.

Thus, for example, they created an Olympic Games parallel to those of Mexico in 1968, with events such as regattas, diving, shooting, sprinting, water polo, bow and arrow, including delivery of medals. There were table tennis matches and a soccer court was even set up.

They opened a Post Office (with their own stamps) so that sailors could send and receive letters. But the years passed and as Mercogliano explains, “with no end to the blockade in sight, several of the companies declared the ships insurmountable and reported the losses to their insurers.”

On a commercial level, the blockade had consequences. “The United States and Europe moved world trade. China was not yet a power. The ships that Europe sent, which were smaller, had to go all the way around southern Africa, so the cost of transport rose,” he reveals to the BBC Lincoln Paine, author of The Sea and Civilization: A Maritime History of the World.

“As the distance across Africa was so long, it was decided that instead of sending two small boats, it was better to send a single larger one. So they began to increase the size of the boats,” explains Paine.

“When the Suez Canal reopened in 1975, there were ships that could no longer pass through, so one of the things the Egyptians have been doing since then is expanding the canal,” adds Mercogliano.

Egypt had blocked the way because “they thought that by interrupting the flow of oil and international trade they would force the Europeans and Americans to re- evaluate their positions towards the Middle East, ” according to Paine.

The measure did not work and in 1973 another war broke out, that of Yom Kippur , in which Egypt and Syria attacked Israel on the day of one of the main Jewish holidays. “The Yom Kippur War brought everyone to the negotiating table again. The resolution of the conflict included the decision to reopen the canal. Everyone saw that the closure had achieved nothing, so Egypt decided to change course,” explains Paine .

The canal reopened for navigation on June 5, 1975 , curiously on the anniversary of the Six Day War. Only two boats from which the 14 trapped were able to get out on their own, the Münsterland and the Nordwind , both German. The rest had to be towed or dismantled in the Canal.