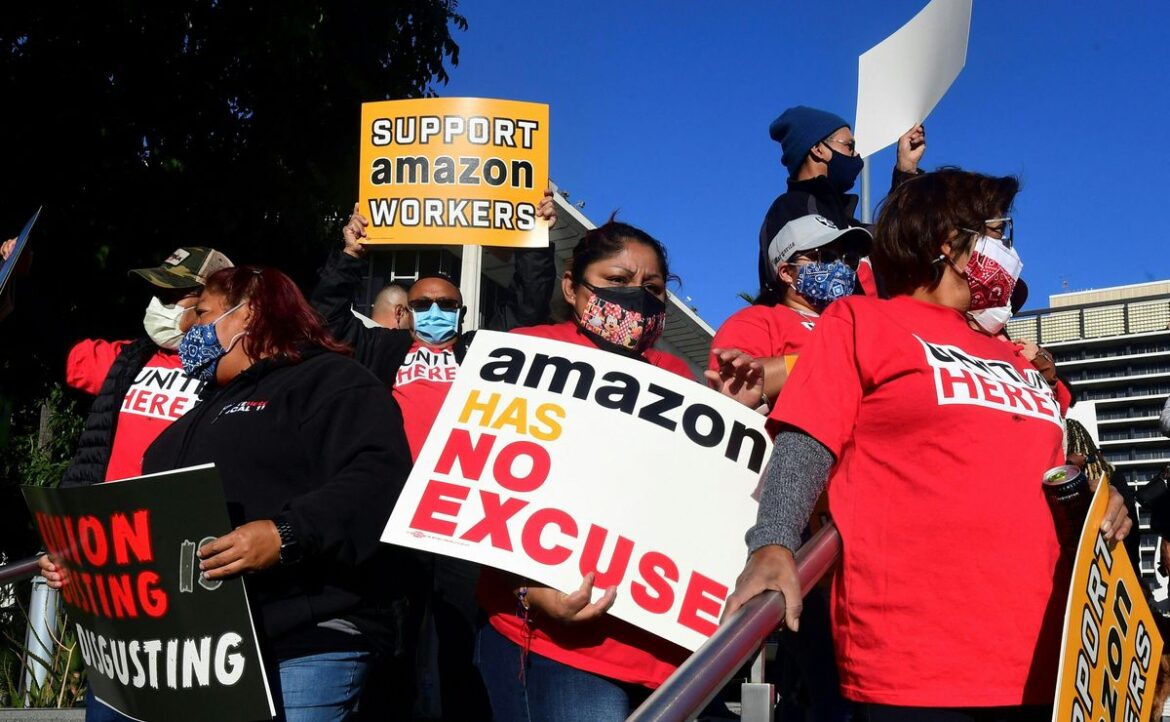 Rarely has an election open to just over 5,800 voters been so relevant in the United States. Those are the employees at Amazon’s plant in Bessemer (Alabama) who, after seven weeks of a vote that ends this Monday, will have decided whether or not to join a union .

If they do so, they will constitute the first workers’ union in America’s e-commerce behemoth, which tooth and nail (and questioned pressure tactics) are resisting the endeavor.

The decision is considered a turning point not only for the future (and present) of working conditions but also in socio-economic and political terms and has served for Joe Bidenconfirm himself as the most forceful president in decades in his support for the workers’ organization .

On February 28, in a video on Twitter, the Democrat made a plea in defense of the ” vital importance ” of unions and collective bargaining . “They put power in the hands of the workers . They give you a stronger voice, for your health, your safety, higher wages, protections against racial discrimination and sexual harassment, ”he said.

“They raise up workers, affiliated or not, but especially black and colored workers.” Although he did not cite Amazon, Biden criticized the company, recalling that ” there must be no intimidation, coercion, threats or propaganda against unions .”

This way of speaking has precedents but distant and several union leaders have stressed that to find them you have to go back to the time of Franklin Delano Roosevelt . “Even Democratic presidents that we liked hardly spoke of the unions,” Larry Silvers told ‘The New York Times’ from the AFL-CIO, the largest federation of labor organizations in the US, “Biden is different.”

Concrete measures
The president has earned applause from workers’ organizations for actions taken early in his tenure . He urged, for example, the resignation from the National Labor Relations Board of the person responsible for ensuring compliance with the rights of employees in the private sector, who was denounced as being too close to the corporations.

He included in the massive stimulus package aid to states and municipalities that the civil servants’ unions considered essential.

Biden in March also showed his support for a legislative proposal, the Law for the Protection of the Right to Organize , which has already received the green light in the Lower House but faces impossible prospects in the Senate , where the 10 Republican votes needed for the election can be ruled out. approval.

And there is also a consensus that, without legislation like that , even the forcefulness of Biden’s words will not prevent a decline in membership . These have been dramatically reduced, especially in the private sector, over decades from what Biden has termed ” assault”By Republican states and businesses.

Its fall (1.5% during the term of Barack Obama) has taken away not only tools from workers but also weight and organizational and political power from the unions.

David vs. Goliath
In this situation, and due to the peculiarity of facing a titan like Amazon (which last year spent $ 18.7 million on lobi in Washington), Bessemer’s vote has taken on enormous dimensions. On the one hand it comes in the conservative south, where the political transformation was demonstrated in November election results such as the Democratic victory in Georgia .

With about 80% of the plant’s employees black, and also with a majority of women , the struggle is seen as a question of rights that go beyond labor . And workers’ efforts have garnered support not only from Democrats, but Republicans as well. like Marco Rubio, who in an opinion column in ‘USA Toda’y warned: “The days are over when the business community can take conservatives for granted.”

In the Alabama vote, where progressive senator Bernie Sanders attended this Friday , whose pressure helped the company to raise its minimum wage to $ 15 an hour in 2018, a judgment on the economic and labor system is also read .

Because Amazon, with more than 800,000 workers in the US and some 500 plants , the second employer in the country and fifth in the world, has become an emblem of problems of monopolistic tactics or of constantly increasing surveillance of employees and poor working conditions , but also of accumulation of wealth and growing inequality(Jeff Bezos’ fortune reaches $ 176 billion). At the polls in Bessemer, more than the future of 5,800 workers is decided.