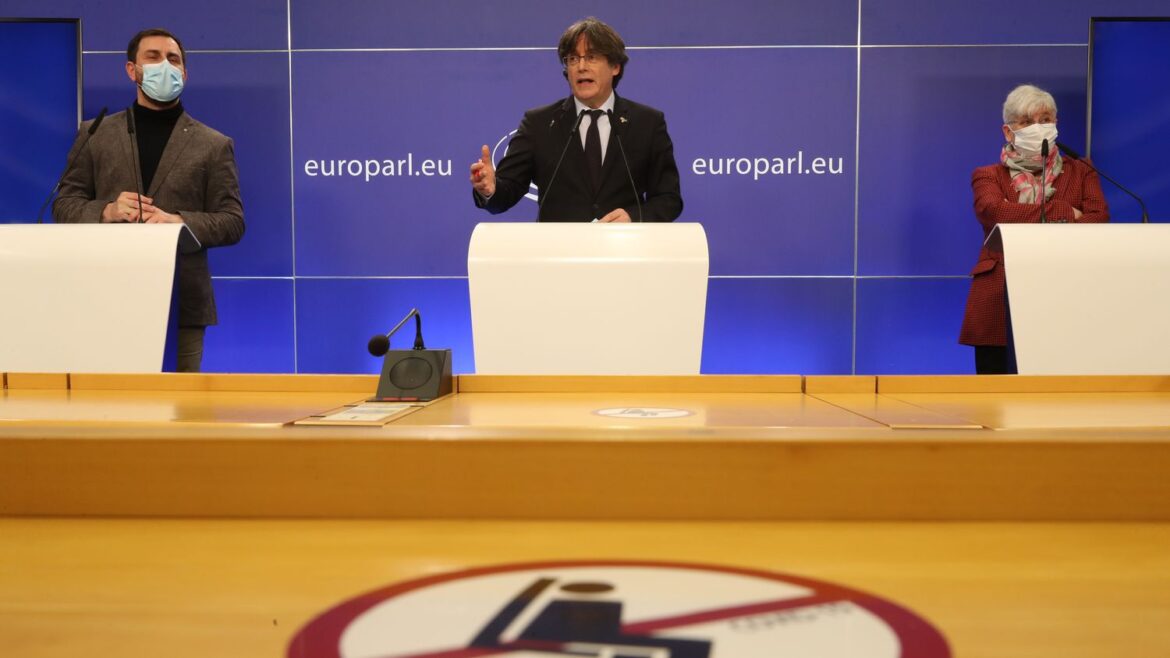 There were no surprises and the European Parliament lifted on Tuesday the immunity that ex-president Carles Puigdemont and ex- councilors Toni Comín and Clara Ponsatí enjoyed as MEPs . The vote opens the door again for Puigdemont to be handed over to Spain to be tried for sedition and embezzlement.

The decision is in the hands of Belgium, but the Supreme Court asked on Tuesday the involvement of European justice due to the fear that the Belgian will refuse to hand over the former Catalan president with the same arguments that he already used to deny the delivery of former councilor Lluís Puig.

The socialist part of the Government considers the decision of the European Parliament on Puigdemont an endorsement of the rule of law and justice.

The European Parliament withdraws Carles Puigdemont’s immunity
But the withdrawal of immunity, being a cumbersome process, was the simplest phase of the path that the Spanish justice has to travel to get Brussels to hand over the former Catalan president and the two former councilors, whom the Supreme Court intends to judge for sedition and embezzlement.

It was taken for granted that the European Parliament would grant permission to act against them, and it has been. In favor of lifting Puigdemont’s immunity, 400 deputies voted, compared to 248 who opposed it and 45 abstentions. In the case of Comín and Ponsatí, there were 404 votes in favor, 247 against, and 42 abstentions.

From now on a new phase begins with more uncertainties than certainties, and the path becomes less safe for the objective pursued by the Supreme. The decision to hand over Puigdemont is in the hands of the Belgian justice, which must reactivate the Euroorders that it has kept frozen since the independence leaders were armored as MEPs.

Belgium can resume the processing of these Euro-orders ex officio, but the instructor of the cause of the procés [illegal referendum of 1-O and unilateral declaration of independence] in the Supreme Court, the magistrate Pablo Llarena, plans to officially demand the reactivation once the notify you of the vote of the Europarliament.

The precedents for Brussels to agree to hand over the former president are not favorable to the Supreme Court because the interpretation of European law that the Belgian justice is applying in most of the decisions it has had to adopt on the secessionist leaders differs from that made by Spain.

The last example, the refusal to hand over former councilor Lluís Puig, has set off all the alarms in the Supreme Court and has led Llarena to request the involvement of the Court of Justice of the European Union (CJEU).

The ultimate goal of the Spanish magistrate is to obtain answers that help him decide his next steps, but also limit the possibilities for Belgium to reject the Euro-orders issued against Puigdemont, Comín and Ponsatí.

The Belgian justice based the rejection of the delivery of Puig essentially on two arguments: that the Supreme Court was not competent to demand the delivery and judge a former Catalan councilor, but that a court of that community should do so; and that there were no guarantees that the Spanish high court would respect the fundamental rights – among them, the presumption of innocence – of the pro-independence leaders.

Llarena disagrees with both, but in the 44-page letter sent to the CJEU, he pauses with special emphasis on defending his competence to act against Puigdemont, a competence that has already been analyzed and endorsed by the Supreme Court itself and the Constitutional Court.

“The criminal and procedural system of another State is not trusted if the first thing that is intended by the executing State is to question its competence to issue an instrument of cooperation based, precisely, on mutual trust and cooperation,” says Llarena , which regrets that, with this attitude, “the principle of trust in the systems of the States of the Union and of mutual recognition of their resolutions is transmuted into a principle of mistrust”.

The instructor asks the CJEU nine specific questions, including several aimed at clarifying whether the court that decides on the euro order (in this case the Belgian) can “assess and monitor” the jurisdiction of the court that issues it (the Spanish Supreme Court).

Llarena also considers that there are no “objective” reasons to suggest that Spain may violate the fundamental rights of secessionist leaders and asks the CJEU about the scope of the report prepared by the Working Group on Arbitrary Detention that warned of this possibility.

The instructor considers that the conclusions of this group (“that it is not created under any international treaty”) are not valid as a definitive argument to reject the surrender of the escaped politicians.

Waiting
Once the preliminary ruling has been sent and after requesting the reactivation of the Euroorders, the Supreme Court will remain in principle awaiting what the Belgian justice decides. Legal sources indicate that the questions raised by Llarena do not oblige Belgium to halt the processing of the arrest warrants, although it would make sense for it to do so in case the CJEU’s responses force it to modify any of its arguments.

If Belgium goes ahead without waiting for the European court and denies the surrender of the former president and the former councilors, Llarena would have the possibility of trying to launch a new Euroorder when the EU answers if their answers are favorable to the thesis of the Spanish magistrate.

The instructor of the cause of the procés is already preparing for this possibility in the last question of the letter sent this Tuesday, in which he questions the court about whether European law would protect the issuance of a new Euro order against the same person and before the same country who has already rejected a previous one.

The end of Puigdemont’s European immunity provoked mixed reactions in Spanish politics. The most forceful was the ERC parliamentary spokesman, Gabriel Rufián, who reproached the PSOE for his vote in favor of lifting the shield of the MEPs. “If they continue like this, they will end up celebrating it in their homes, and not in La Moncloa,” he warned.

The socialist spokesperson, Adriana Lastra, tried to remove the iron from the ERC notice and interpreted it in a Catalan post-electoral key due to the “complex moment” of negotiation for the formation of the Government. PP and Citizens celebrated the resolution of the European Parliament and charged United Podemos for voting against it.